Just added to your cart

Rufino Tamayo, a Oaxacan painter of international renown, was one of the great modern artists of the 20th century. Tamayo died in 1991 at the age of 91 and had a long and esteemed career. His artwork can be found in important collections worldwide. During his life he was the recipient of many prestigious awards, including France's Legion d'Honneur.
Tamayo was a prolific artist who was a master of many mediums, including oil, watercolor and lithography. The artist, in addition to producing works on paper and canvas, was also a muralist whose work adorns the walls of museums, universities and libraries throughout the world. Additionally, Tamayo pioneered a new print-making technique known as mixografia with several of his works produced in this medium. This innovative process allows a traditional lithographic print to be created in relief which produces fine surface detail as well as volume. In his later years, Tamayo added sculpture to his artistic repertoire, utilizing his own paintings as a source of inspiration for subject matter.

Rufino Tamayo was a contemporary of fellow Mexican artists Diego Rivera, Jose Clemente Orozco and David Alfaro Siqueiros. Unlike these muralists, however, whose work held strong political commentary, Tamayo eschewed this path and forged his own. The subject matter found in his work is apolitical and purposefully so.

Although his work is embedded with distinctly Mexican roots, both in color and in subject, Tamayo's art is ultimately a response to universal and not temporal matters. Tamayo's lack of enthusiasm for political commentary was not appreciated by Rivera, Orozco and Siqueiros who firmly prescribed that important art had to address the societal injustices of the day. Finding his work criticized in Mexico, Tamayo left the country to live for extended periods in both the United States and France. This decision proved beneficial for Tamayo who created many of his important works abroad. 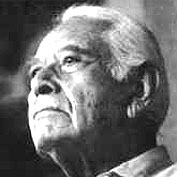 Born in Oaxaca to parents of Zapotecan Indian ancestry, Tamayo's cultural heritage is evident in his artwork. Orphaned at a young age, Tamayo was sent to live with his aunt in Mexico City. The young artist worked as a vendor at his aunt's fruit stand, helping her sell produce. The bright and beautiful colors of the tropical fruit has been credited as influencing the artist's future palette. This experience also provided the catalyst for a favorite motif of Tamayo's, namely the watermelon, which is depicted in many of his works. As a young man, Tamayo attended the Escuela Nacional de Bellas Artes, San Carlos, in Mexico City but left before graduating to pursue his studies independently.
After leaving school, Tamayo accepted a position at the Mexican Archaeological Museum. This proved to be a pivotal turning-point for the artist. At this museum, Tamayo was responsible for copying copious amounts of pre-Columbian artifacts by hand. This activity enormously influenced his future work. Through this process, Tamayo became intimately acquainted with the artwork of his ancestors which in turn, greatly shaped his artistic vision and expression. Additionally, Tamayo was also inspired by European modern art movements, especially the work of the Cubists and also that of the Surrealists.
Throughout his life, Tamayo and his wife amassed a wonderful collection of pre-Columbian treasures which today reside in the Museo Rufino Tamayo Art Museum, located in his home state of Oaxaca. Additionally, works of Tamayo and other modern masters, can be found in the Tamayo Contemporary Art Museum in Mexico City. This collection, which Tamayo and his wife orchestrated, was generously donated by the couple to the people of Mexico. 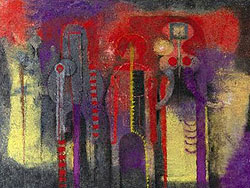 Recently, an amazing story unfolded concerning one of Tamayo's famous works. The painting, entitled Tres Personajes went on a mysterious adventure after being sold for $55,000 to a patron in the 1970's. During a move in the 1980's, the piece disappeared from a storage locker. It was not seen again until 2003 when it was spotted in an alleyway in New York. The large brightly colored canvas was placed outside with the trash, placed between two large dumpsters. A woman, who was on her morning walk came across the painting. Initially, she was reluctant to bring the painting back to her small apartment due to its size. However, there was something about the painting that spoke to her. The woman fortunately listened to her intuition and it was a good thing she did. The painting recently sold for over $1,000,000 at auction. The woman enjoyed a reward of $15,000 from the painting's owner plus a finder's fee from the auction house.

Considering the quality and mastery of Tamayo's paintings, it is easy to understand why the woman was compelled to retrieve the painting from its incongruent surroundings. Tamayo's paintings actually glow from within. The artist had a command of color that was sublime and his subject matter transcends individual commentary. Perhaps the following quote from Octavio Paz, the Mexican poet and Nobel laureate, sums up the work of Rufino Tamayo best- "If I could express with a single word what it is that distinguishes Tamayo from other painters, I would say, without a moment's hesitation:sun. For the sun is in all his pictures, whether we see it or not: night itself is for Tamayo simply a sun carbonized".